By allowing ads to appear on this site, you support the local businesses who, in turn, support great journalism.

Farran Smith’s first introduction to paddle sports wasn’t her idea — for the most part, she was just watching her older brother Emerson glide through the shining water at Lake Lanier Olympic Park.

But the competitor in Smith became more and more intrigued — she had to try for herself.

“I remember watching the other kids and they looked like windmills to me,” said Smith, 16. “I loved it so much and I decided that was what I wanted to do.”

Several years and hundreds of training hours later, Smith came within seconds of securing a spot in this summer’s 2016 Rio Olympic Games when she finished fifth in the 2-woman kayak 500-meter event last week at the Pan American Championships in Gainesville.

Smith stands as one of the shining success stories for the Gainesville-based Lanier Canoe and Kayak Club. She’s also in the minority on her team.

Smith is one of only four girls in coach Jim O’Dell’s 15-person High Performance 1 sprint team, which comprises paddlers from the ages of 13-14 and up.

LCKC’s numbers align closely with a recent national study published last year by The Outdoor Foundation, which creates an annual breakdown of Americans who participate in paddle sports such as kayaking, rafting and canoeing.

The study suggests that only 30 percent of kayakers throughout the country from the ages of 13-17 are female, while 40 percent of canoeing participants are female in the same age bracket.

O’Dell attributes the figures as a sign of the times.

“It’s that cycle,” said O’Dell. “For whatever reason, we’re in an extremely male-dominated cycle here. That hasn’t always been the case. Only a few years ago, we placed 11 athletes from here in the junior (U.S.) national team and six of them were girls.”

While new paddlers are reliably taking part in LCKC’s events at middle school ages, developmental coach Kalen Scholz said Thursday that she often sees many new recruits fall out of love with the sport when they get to their teenage years. She currently guides 35 regular paddlers from sixth to eighth grade, with 20 more coming for the summer. 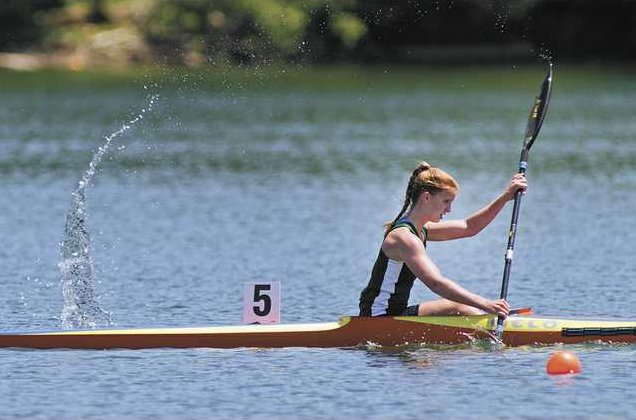 Young girls have a harder time sticking with paddle sports, according to Scholz, due to a variety of pressures from school, new friends and self-esteem issues.

“It’s challenging,” said Scholz. “A lot of times, they struggle with their confidence. I like to recruit them to our program when they’re young, so hopefully by the time they’re older, they’re so invested in what they do, they won’t care what others think of them.”

Maggie Bowmar and Kaley Martin, two of Smith’s teammates, believe their male friends from school don’t hold the same level of respect for what they do. Much of the stigma, according to Martin, can be linked to body size.

“My friends will say ‘Why do you paddle, you’re skinny,’” said Martin. “I don’t know if they feel threatened that I’m trying, but guys don’t see it as the same.”

Ensuring equal opportunities for women in paddle sports has become a key issue for Dr. Cecilia Farias, president of the Pan American Canoe Confederation (COPAC). Farias recently told The Times that she’s using her influence to break down what she called “invisible barriers” in Latin cultures, where women aren’t given the chance to train with the same tools or equipment as their male counterparts.

“I believe that every person has to advocate for that,” she said. “We have to try. It’s not for me, it’s for my granddaughter.”

Back in the States, O’Dell worries that the lack of consistent races close to Lake Lanier can make it tougher for young girls to stay invested. He’ll often instruct his athletes to take part in 5K races to hone their competitive instinct, especially if his paddlers have grown weary of competing against each other at practice.

The demanding practice schedule also tends to weed out the less-dedicated paddlers: High Performance 1 athletes practice eight to nine times per week, including sessions before school.

“I think it’s all about the community,” said Smith. “If you really put importance on what we’re doing here, we’ll stay. Being an athlete is rewarding, but sometimes for girls, they get discouraged. I sometimes get made fun of because I’m muscular. But I’ve done amazing things I never thought I could do with my body. If you spread that message, it’ll get around.”

Scholz feels that her young recruits will want to emulate their coaches, who would then become more like role models.

That message has already been received by Smith, who has a chance to compete for a spot in the 2020 Summer Games in Tokyo, Japan. She would be the first female LCKC product to reach the Olympic Games.

“I think we’re doing the best we can,” said Smith. “I definitely think this is one of the best sports women can be in. ... We’re not far off.”